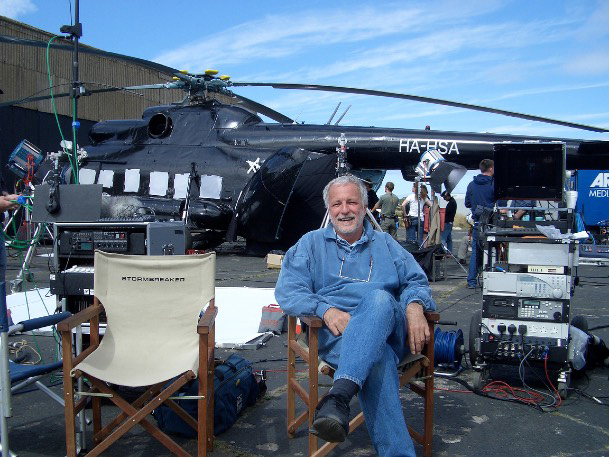 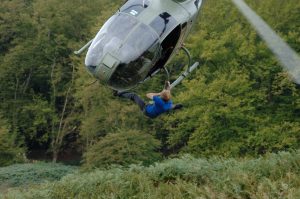 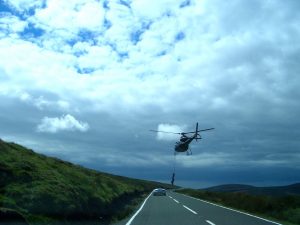 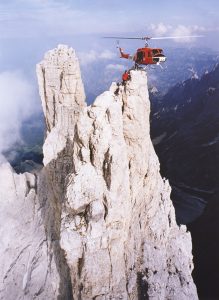 Flying for the movies’ – Marc Wolff is the real star of scores of action films from James Bond to Mission Impossible and the man who dropped ‘the Queen’ into the Olympic Stadium. Marc is the man who puts the most memorable aerial thrills on the big screen.

If you don’t know Marc Wolff, you’ll certainly know his work. Virtually every notable aerial stunt you’ve ever seen in the cinema or on TV has been engineered or flown by Marc Wolff. He’s contributed to twelve Bond movies, the entire Harry Potter canon, the Star Wars franchise, the Superman series, Black Hawk Down, Air America, The Vertical Limit, Cliffhanger, Fallout – Marc has flown for more than 200 feature films and hundreds more big-budget commercials or TV shows, and has himself been the subject of an hour-long ITV documentary, Shoot to Thrill. Dropping ‘The Queen’ and ‘James Bond’ into the Olympic Stadium during the opening ceremony might be considered to be the pinnacle of his career, but you wouldn’t bet on it because he’s not done yet. Marc was responsible for transferring a stunt man on a
cable stretched between between two jets during the filming of Cliffhanger, one of the most expensive stunts ever successfully pulled off. The stunt won Marc an alternative ‘Oscar’ as the best film stunt of the year.

A naturalised Briton, Marc was a Huey pilot who was awarded the Air Medal 22 times and the Bronze Star in Vietnam and became the youngest Captain in the US Army at the age of 21. He came to England in 1971 to work as a crop-sprayer, flew an Enstrom for the Met Police in London and drifted into movies through a cameraman friend. Later he formed Flying Pictures, which is world-renowned as the premier provider of aerial stunt flying. His first Bond film was The Spy Who Loved Me, when he impressed the director with an edge-of-the-seat JetRanger pursuit of Roger Moore’s white Lotus, ending up with the car plunging into the sea and the helicopter being blown up, all very tasteful. Later, in For Your Eyes Only, Marc was the JetRanger pilot who scooped up Blofeld’s wheelchair with his skid and dumped him down a factory chimney. Apart from the big franchises Marc’s work can be seen on everything from Good Morning Vietnam and Memphis Belle to The Omen and Mr Bean. Bridget Jones, Mission: Impossible, Indiana Jones, Saving Private Ryan, Gulliver’s Travels, Sherlock Holmes, Robin Hood and Around the World in 80 Days are all on his list of credits. He is also involved in film production and has served as Aerial Unit Director on films like Air America, Charlotte Gray, The Vertical Limit, and Harry Potter and the Half Blood Prince. He was Second Unit Director on Amelia, The Gunman, Doomsday, Flood, Unknown, and many more, and he is believed to bethe best-paid helicopter pilot in the world. For Mission Impossible: Fallout, the actor Tom Cruise, a licensed pilot, flew the helicopter with guidance from Marc, whose forte was showing the aircraft to best effect, rather than the actor. Marc also flew a Squirrel sideways down the Thames to film Cruise running across the roof of Blackfriars Station. It’s entertainment, but it’s deadly serious – Marc has been involved in a number of accidents, including one in which a stuntman was killed.

The 2012 stunt in which ‘The Queen’ and ‘James Bond’ parachuted into the Olympic Stadium in London was one of his most challenging assignments and took months of planning and rehearsals, including more than a hundred dry runs and practice jumps. They had to drop a parachute through an area less than 100 feet wide between cables strung across the stadium, and they had a two-second window in which to do it. They were still rehearsing at 4pm on the day of the opening because for the first time, they had to do it with the wind in the north. In fact, ‘hero moment’ was the only time everything came together perfectly during the whole rehearsal process.

Marc is no stranger to Bodmin, having lived near Liskeard for several years in the later part of the 20th century, and he has flown into our airfield many times in both fixed-wing aircraft and helicopters.