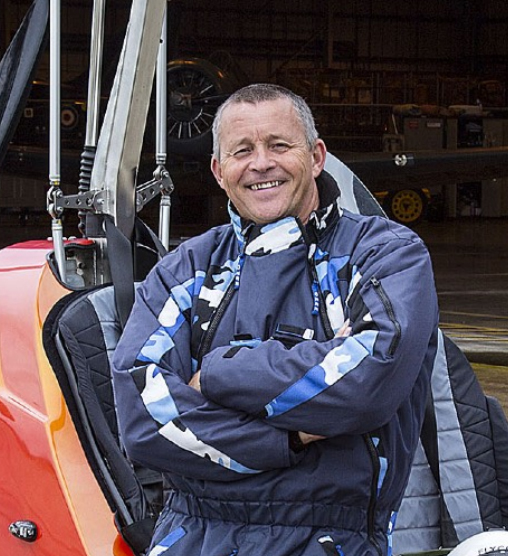 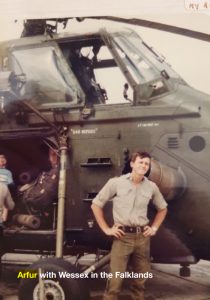 This talk is not to be missed.

Ten tours in Iraq, flying experience in combat zones in Northern Ireland, the Falklands and the Gulf War, Arfur has some 12,500 hours, roughly half on helicopters, half on fixed-wing. He has over 6,000 hours as an instructor and has spent almost 1000 hours on night vision goggles. He is in fact Ian Bryant MBE, an honour bestowed upon him for helicopter operations in Iraq – work which involved leading formations of half a dozen helicopters at very low level at night. Arfur joined the Navy as a Midshipman in 1977, flying the Wessex 5 on 845 Naval Air Squadron (NAS) for his first front-line appointment, including regular tours in Northern Ireland. He was then appointed to 772 NAS at Portland in an SAR role, also on the Wessex 5. He served with 848 NAS in 1982 during the Falklands War, and during the remainder of his 16-year Navy career he qualified as a QFI on the Bulldog and the Chipmunk. He also served another tour with 845 NAS on the Sea King 4 and had brief flings with the Hunter, Hawk and Tucano. He completed the Royal Marine All Arms Commando Course and was a Combat Survival Instructor. He left the Royal Navy at age 38 and flew for British Aerospace in Saudi Arabia as a civilian QFI, teaching Saudi cadets on the Cessna 172. After five years he joined the Royal Air Force as a QFI and QPNI (Qualified Pilot Navigator Instructor) at the Central Flying School, RAF Cranwell, then as Head of Training and OC Standards at the Joint Elementary Flying Training School, RAF Barkston Heath, on the Firefly. He volunteered to return to operational helicopter flying and flew the Puma HC1 between 2003 and 2008 on 230 Sqn and 33 Sqn. His ten tours in Iraq were mostly as Aviation Commander and QHTI (Qualified Helicopter Tactics Instructor) in support of Allied land forces – this is where the MBE came in. After completing his 29-year military career as a RAF Shawbury QHI in 2011, he flew as a civilian QHI at the SAR Training Unit at RAF Valley, teaching advanced SAR techniques to foreign aircrew on the AW139. In 2014 he returned to the fixed wing world and flew for 772 NAS at RNAS Yeovilton, teaching RN Grading students on the Tutor. During this Ime he also owned and instructed on his own gyroplane. In 2017 he moved to Jerez, Spain and spent a year teaching on the PA28 with Flight Training Europe, mostly teaching IFR procedural techniques and UPRT skills. Finally, he returned to the UK in 2018 to fly and ground instruct with the Draken Helicopter Academy at Newquay until its closure. Arfur has flown dozens of different types of aircraft, and because of his experience he was chosen by the CAA to be part of a two-man team certifying the Cavalon Pro gyroplane for night operations. His log book features everything from the Hawker Hunter and the Sea King down to the humblest fixed-wing piston singles. Apart from those already mentioned, his qualifications, mostly military, include QHI, QHTI (Tactics Instructor) Instrument Rating Instructor (Sea King), QFI, QPNI (navigation), IR Examiner, CFS Standards Instructor, Crew Resource Management Instructor, Sea Survival Officer… and as a civilian, CPL/IR, FI (including aerobatics, IRI and night) and every type of gyroplane rating. Apart from being BAe Chief Instructor (Cessna) in Saudi he was Project Manager and QHI for Cobham in Cyprus on the AW139 and did the same job with the Egyptian Air Force in Cairo. He has a bottomless fund of unmatchable ‘there I was’ stories from northern Norway to the South Atlantic via the deserts of the Middle East, and may be induced to tell some of them at the Club when we resume the AEROCLUB talks in the post-Covid world. As an example… Arfur was flying the helicopter from which the pictures of HMS Antelope sinking in San Carlos Water were taken, flying an ITN camera team with reporter Mike Nicholson over the scene in a Wessex at 200 feet. “I’d been given the wrong frequency for the air raid warning alert, so imagine my surprise when I saw four Argentine Skyhawks coming up San Carlos Water, two either side of me,” he says. “I went into an emergency descent and a Rapier missile crossed right in front of my nose and took out one of the Skyhawks, and every ship for miles opened up on them, with me in the middle. But I got on the ground virtually next to the Rapier battery and they didn’t even scratch the paint.” With regard to his extraordinary flying history, Arfur says he had never thought of himself as the best pilot nor the best instructor, but he found his niche, and came to be recognised as someone who could be relied upon to make sound decisions under pressure in critical situations. One of the great strengths of general aviation is the fact that people like Arfur Bryant are able and willing, after a professional career of hard-won experience, to put their skills to good use teaching ab initio pilots to handle little aeroplanes at grass airfields in the sticks – although he will insist that a pilot is only as good as his last landing! We are enormously lucky that he has agreed to join the team. CFI Bruce Abbot says: “Arfur has a hugely impressive skill-set of flying training experience. He brings with him a treasure chest of aviation training ideas that will only go to improve the smooth running and efficiency of the club’s flying training”.